I bet 35 years ago they didn't sit as long either.

also, fwiw, as far as stabil, sea foam and such... sea foam is for 2-stroke outboards. stabil was intended for leaded fuel, and startron was lauded as being 'the cure' for ducati fuel tanks made by acerbis that had swelling issues. All i can say is, ducati warrantied my tank on the sport classic evn though i used the startron, and i can tell you my ex father in law who believed in stabil used to get me to clean his hateful carb on his VTX1100 every year after he 'ran it dry' with stabil and left it for 4 mos. for years, every year. FI bikes do not suffer the same fates., the '14 gladius i had sat for 2 years in a police impound yard. I got it home, stuffed a battery in it and it ran just fine on the swill in the tank.

that being said, most of it is flat out snake oil.

sha66y said:
Also a newb when storing a bike for winter and battery maintenance in general. When I wired up the 12v adapter it was a pain to take apart the bike to get to the battery. Are the comments above suggesting you can install some kind of a plug so I only have to open the bike once (before eventually needing to replace the battery)? Also, I see 1 and 2 AMP battery maintainers, which is right for the CT125?
Click to expand... 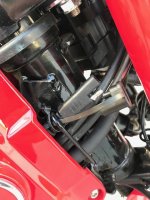 running from battery to this cable loop at the forks

bigcanoe said:
Do you guys have a recommendation for a system for 3 bikes?
Click to expand...

I use a Harley Davidson I bought for my Sportster. I just bought an extra plug and wired it up. I swap it between bikes

Yeah, you can swap between three bikes, they don't have to be on constantly. That said, once I got up to 6 bikes and a few classic cars I just bought one for each since even in the summer a few will go for months sometimes without a ride