With the range on this bike it's easy enough for me to plan gas stops, but it's also nice to not have to go out of the way for gas, and to have some on hand if someone else runs out. I went with this auxiliary fuel canister setup because an extra 2L/0.5Gal of fuel should be enough for my riding, the fuel tank tucks in close keeping the bike narrow in the rear, and it utilizes more mount points than just the two toolbox bolt holes that some of the other side racks use. If I wasn't running a top case I would have gone with a Rotopax on top of the rear rack as my first choice. 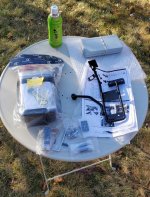 Four PH2 screws attach the fuel tank kit to the helmet holder rack. The fuel tank just straps into place with velcro and the weight rests on the bottom of the side rack. With the velcro tight there's very little movement, but it's still not as secure as a Rotopax setup, and it's more likely to wander off than a locking Rotopax setup. The side rack is attached with four bolts, two go where the toolbox originally mounted under the rear rack, one goes to the center rear of the bottom of the rear rack, and one goes to the tail light assembly on top of the rear fender. I mounted the two bolts to the toolbox mount holes first. 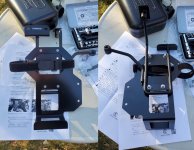 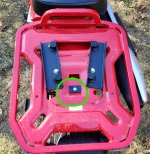 The final side rack mounting bolt replaces one from the tail light assembly, it's at the top left of this photo. I reused the original toolbox bolts, but picked up two nyloc nuts at the hardware store and fastened them to the other side of those bolts to secure the toolbox to the new side rack. I thought it was weird that these nuts appeared to be missing from the kit, but maybe they expected you to take the nuts from the rear side reflectors since a product photo shows one of those removed. The rear side reflector is removed because the new toolbox location is too close for it to fit. To retain the original side reflector I clamped the bracket, used a punch tool to mark a spot for a new hole, then drilled a new hole for the reflector bolt to to fit through. With the reflector in its new mount location it covers up the hole from the original mount location. The toolbox lid now opens upward and is less likely to bounce open if the release mechanism finds its way shaken to the open position (I have a reusable zip-tie holding it shut anyway), but when you flip the lid open it does touch the left rear turn signal now. A possible downside to this toolbox mount position is that if you have something small at the bottom of the toolbox it could be harder to get out. 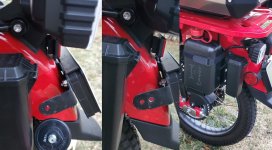 I think the setup looks pretty clean, the color scheme matches the bike, and even with relocating the side reflector it wasn't difficult to install. It came with a simple fuel spout (not a "safety" fuel spout) that I slid into the cargo net inside the lid of my top case for safe keeping, though I don't think you'd really need it for filling this bike's gas tank from such a small container unless it's windy out. 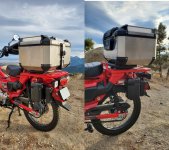 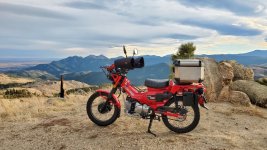 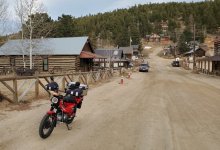 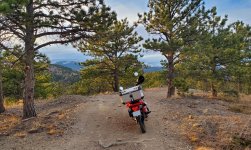 Well done.
Looks like you have the perfect area to ride your 125.

Looks like a dandy set up, it's great to have some extra fuel along for peace of mind...and to prevent unplanned hiking.

Nicely done. I like MUCH THE SCENERY! Thanks for posting.

Which model of HippoHands did you use, and how did you attach them? I recently sent a set back, because I couldn't get them to fit on the short bars. Thanks.

That's a nice setup for a fuel can. Well done!

Thanks. This was up the road from me in Gold Hill, CO and on Switzerland Trail. In the warmer months I have motorcycle camped there with my Ducati Scrambler, but it is a LOT more enjoyable and less harsh of a ride on a small bike.

The Hippo Hands are the previous version of the Rogue model. They're not on their web store anymore, but if you contact them they keep some of the older models on hand and will sell them. 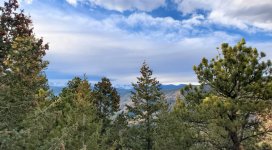 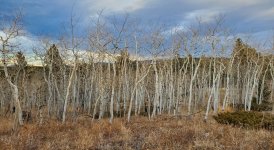 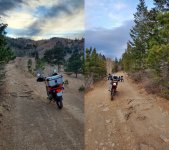 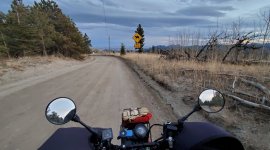 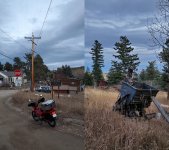 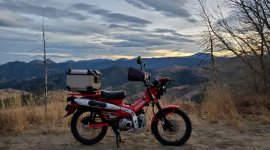 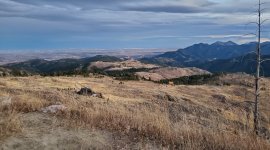 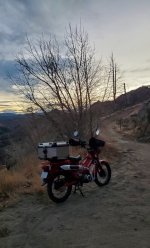 Nice looking riding country .I hope you can ride and enjoy your bike often. Have a great thanksgiving .

dmonkey said:
Thanks. This was up the road from me in Gold Hill, CO and on Switzerland Trail. In the warmer months I have motorcycle camped there with my Ducati Scrambler, but it is a LOT more enjoyable and less harsh of a ride on a small bike.

The Hippo Hands are the previous version of the Rogue model. They're not on their web store anymore, but if you contact them they keep some of the older models on hand and will sell them.

I have a set on my RX-4. I think they're great. I bought a set for the CT, but they were way too big, and I returned them. Did you do anything different to make these fit? Thanks!

With the older Hippo Hands they fit okay for me, I added the velcro stickers they came with to the front and side of the Barkbusters so they stay in place.

dmonkey said:
With the older Hippo Hands they fit okay for me, I added the velcro stickers they came with to the front and side of the Barkbusters so they stay in place.
Click to expand...